As a microbusiness, surviving the pandemic means taking it one day at a time (NPR Marketplace)

I love the cheese lady. 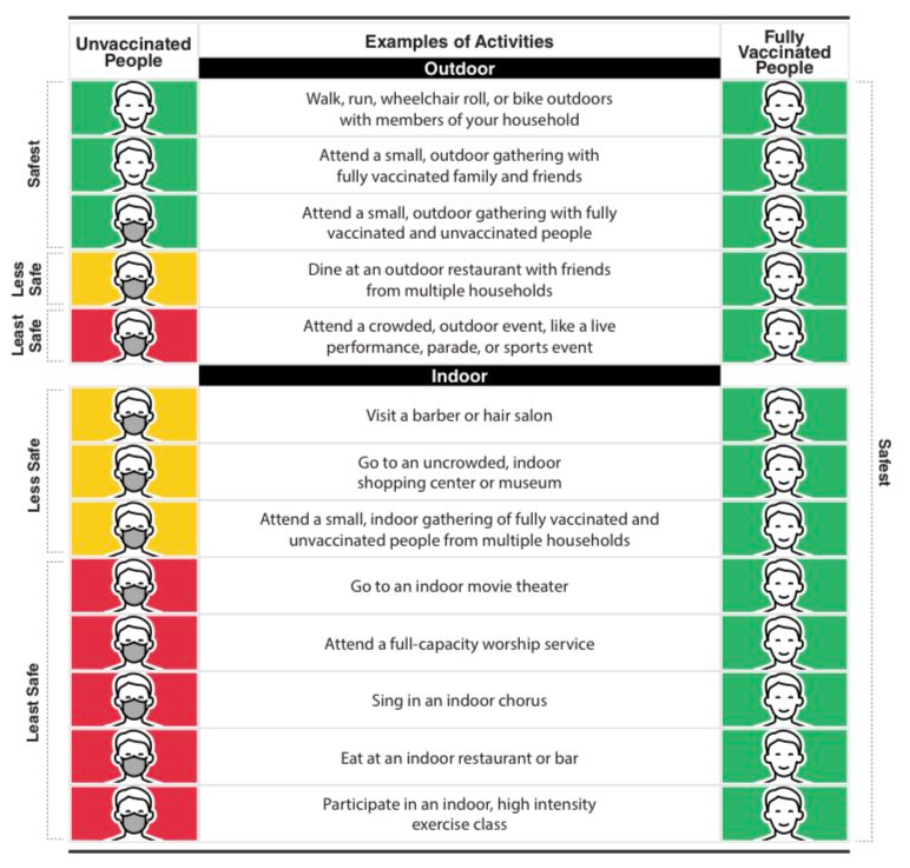 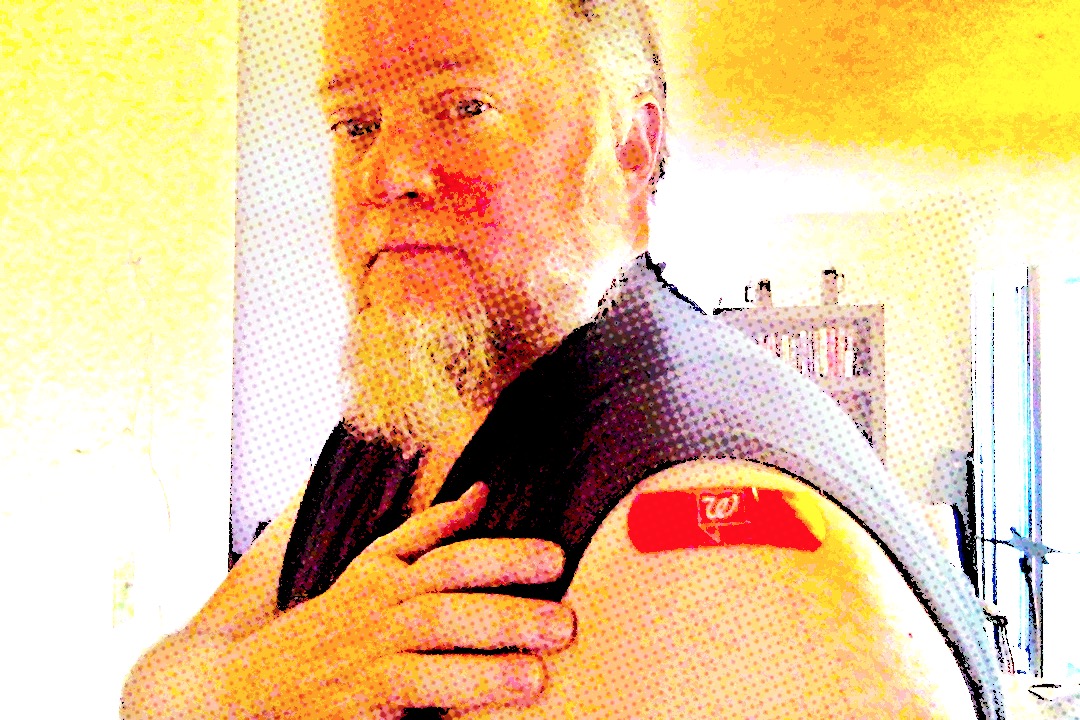 From last night’s TRMS. Stick with it through her technical issues. Is worth it.

From March 19 until June 22, 2020, I was as locked down as a person could be. The March date is the date I began working from home. I went in. They handed me a Mac and said guess what. You’re working from home. This was a week after the NBA suspended their season due to SARS-CoV-2. The June date was Father’s Day. On that day, there were 415 active cases in Monroe County. And I’ve been visiting those folks, or at least with my Dad, pretty much every weekend ever since.

On Friday, there were 1,887 active cases in Monroe County. Strong Hospital is at 100-percent capacity. Nationally, more than 184,000 cases were reported Friday. And now, they’re finding that this disease goes for your balls.

This is not to mention the anecdotes I’m seeing on the TV. The young woman who was wheeled into the ER on Sept. 28 and who is still lying in a hospital bed, too weak to speak in her full voice. The college student who tested positive one day and died alone in her dorm room two days later.

It’s funny, on my weekly call with my Mom, we shared an experience from Friday, and we both kinda did the same thing. It had been announced that Impeached Preznit Carnage Loser was going to speak at 4 p.m. Bear in mind that he had not yet spoken publicly since he was defeated on Nov. 3. So, I put the television on, muted, with the intention of listening in the off chance that he might concede. He came out at 4:30-ish, and so I turned up the sound.

I muted it almost immediately. As did my Mom. So did you, probably.

It was pathetic. He stood there in same the Rose Garden where he promised magical websites and a testing site on every corner, and he tried to take credit for progress on vaccines, and he told us the economy is wonderful, and he told us the COVID numbers are so terrific, on a day when the number for new cases in the United States was nearly cresting to 200,000 daily. This guy reportedly hasn’t attended a COVID Task Force meeting in five months. I couldn’t listen. I couldn’t stand to. The only words I want out of this idiot’s mouth is “I concede.”

Guess who they voted for?

Raditz also provided one of the more entertaining exchanges of the Sunday morning shows in her interview with John “Why Are We Still Listening to John Bolton” Bolton, where Bolton was all like, Republicans need to come out and admit that Biden won, and Raditz was all like yeah, but they’re not doing that, and Bolton was all like, yeah, but they should. This is the man who could have provided vital context toward ending this horrible nightmare in January but chose not to because he wasn’t fond of the process. Bolton could have been this decade’s John Dean but chose to sell a book instead. Why is he on my TV?

Look, Trump lost. Joseph R. Biden Jr. is President-Elect, and he will be taking the oath on January 20, 2021. COVID is real and has now killed 245,000 Americans, and the most effective way to avoid its spread is to cover your schnoz and piehole when you go out. And you do that not just for you but for me, too. Because I haven’t sat at a bar for a burger and a beer with my Pop in nine months, and now I’m even nervous about a brief visit.

And none of this needed to happen. It’s ridiculous.

So â€” you know, itâ€™s interesting: [Dr. Fauci]â€™s got a very good approval rating, and I like that. Itâ€™s good. Because remember, heâ€™s working for this administration. Heâ€™s working with us, John. We could have gotten other people. We could have gotten somebody else. It didnâ€™t have to be Dr. Fauci. Heâ€™s working with our administration. And, for the most part, weâ€™ve done pretty much what he and others â€” Dr. Birx and others, who are terrific â€” recommended.

And heâ€™s got this high approval rating, so why donâ€™t I have a high approval rating with respect â€” and the administration, with respect to the virus? We should have a very high, because what weâ€™ve done in terms of â€” weâ€™re just reading off about the masks and the gowns and the ventilators and numbers that nobody has seen, and the testing at 55 million tests; we tested more than anybody in the world. I have a graph that Iâ€™d love to show you â€” perhaps youâ€™ve seen it â€” where weâ€™re up here and the rest of the world is down at a level thatâ€™s just a tiny fraction of what weâ€™ve done, in terms of testing.

So it sort of is curious: A man works for us â€” with us, very closely, Dr. Fauci, and Dr. Birx also highly thought of. And yet, theyâ€™re highly thought of, but nobody likes me. It can only be my personality. Thatâ€™s all.

Or because you’re doing a shitty job.

I mean, can you imagine a more pathetic, whiny statement from any other preznit? Gravity crush, that is astonishing.

Meanwhile, U.S. Rep. Louis Gohmert (Asshole Party, Texas), who has spent as much time as possible marching around without a preventive face covering, was diagnosed with the COVID. And, he decided it was best to inform his staff in person.

The schadenfreude needs to not be so out of control. I HOPE HE HAS RESPIRATORY ISSUES FOR THE REST OF HIS LIFE shhhhh….

There is a real feeling among most Democrats I’ve talked to of waiting for the other shoe to drop. Just the other day, my dear Mother commented to me that Biden needs to stop messing around and pick a running mate already.

Whatever form it takes in the SARS-CoV-2 world in which we live, the Democratic Convention is planned for the third week of August. So we’ll know soon, at least by then. He has indicated he will announce by Aug. 1, so it will be soon indeed. I think many people want to know so they can start to see the campaign coalesce, and to have some relief that Biden has picked someone who will energize his campaign.

As it stands, the running mate pick is perhaps one of the most important decisions a candidate makes. I tend to be rather superficial in figuring on my favorites. If the candidates don’t look nice together, or if they don’t exude some kind of chemistry, they aren’t going to win voters over. I think in this regard, the Obama-Biden match was sublime. Hillary Clinton’s choice in 2016? Not so much.

You don’t even remember that person’s name, do you?

John Kerry picked John Edwards, and they looked like they belonged on a wedding cake your local true believer bakery would refuse to bake. And let’s not even start talking about a certain former governor of Alaska.

But this morning I thought of another factor that’s going to make Biden’s pick particularly important: She is likely to be the person who heads up Biden’s coronavirus efforts.

As feckless as it is, Trump’s coronavirus team is already structured via the Eisenhower. Chains of communication, data, work already completed, phone trees, email chains, all the little crap that makes things go in Washington, they are already going through the Vice-President. If I were the new Preznit, and I knew that I had to hit the ground running on this issue, I would turn to my Vice-Preznit and say “congratulations, you’re our new Sars Czar.”

Sars Czar, you like that? I just made it up. Nobody has ever heard of that before.

So when you’re mulling your own favorites, mark my word on this one: Factor in that Biden’s Vice President is likely to be the person in charge of the new federal efforts on the pandemic. Who do you want in that role? That’s your gal.

On April 15, 2020, New York Governor Mario Cuomo announced during his daily coronavirus briefings that New Yorkers would be required to wear masks when “social distancing” would not be possible.

I don’t think it’s a coincidence that immediately following this announcement, the infection rates in the state drove downward quite noticeably.

You can see it for yourself. I screen-captured this graphic from the New York Times (from a running article updated as of today). 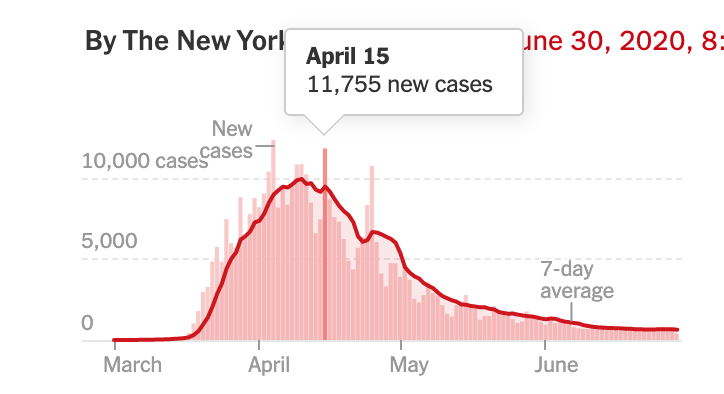 Now this is no sociological study. It’s a news graphic. I know. But what, that’s mere coincidence? I don’t think so.