I took a week off in February. It was wonderful. I recommend a week off of work every once in a while. It’s good even if you don’t do much or get much done, of which I did neither.

The primary mission did get done, however: Order a new bed. The bed I’ve been sleeping in I bought in November 2016, and it was a good bed for about a year or so. It was a Serta that bore the name of a hotel I’ve stayed at a few times called the Bellagio. I paid $987 for it and the bed frame. After a while, I started waking up with my back hurting horribly. I felt what had happened, the bed material had broken, and the bed could no longer offer me proper support. So for at least two years now I’ve been sleeping on the broken bed for as long as I could stand and then marching to the recliner for the rest of my rest.

I finally took the plunge and purchased a Yellowstone brand mattress. It cost a bit more then my previous purchase, but if the salesman’s words are true, it’s one of the better mattresses you can get, with high-quality materials and excellent craftsmanship. I had looked at the same bed six months ago and had quite favorable opinions on it then, but I still needed to research models and to consider financing this little project. I had already arrived at what it would cost me to buy my other favorite choice, the Purple mattress, which I have had the opportunity to test in-store a few times. I would have required a Purple 3 hybrid, which are not cheap. So I set that as my initial budget and went from there.

The bottom line, however, is that I don’t feel good about making such a large purchase like that without looking a person in the eye. I want to be able to find a person to ask any questions I might have. You can’t really do that with a bed-in-the-box. So I ended up with the Yellowstone with an adjustable base. I took delivery of it yesterday, and so far, I am mighty pleased with it.

Except for this: I didn’t think to question the fellas who delivered it when they loaded up our elevator with the adjustable base, the mattress, and their own burly bodies to traverse to the third floor. Shortly after they left, and after my Dad left–he had been here to watch the Jayhawks eke out a victory in men’s basketball over the Baylor Bears–I left my apartment to go to the grocery. And the elevator’s exterior doors seem not to be closing.

I’m assuming the thing got overloaded and went into some sort of safety mode. I’ve seen it do this before, so it ain’t the first time with this elevator.

Have I mentioned that I hate elevators?

Anyway, I can tell you I’ve already taken two unintended naps in the new bed and had a much better night’s sleep last night than I have in a while. My Mother and I joke that I’ve just taken on a car payment–which is nearly true–but I can think of many less responsible things to do with money. A kid’s gotta sleep.

Today, I am cleaning and digging finally into the CD compilation of Brasilian music that I got last week.

In other news, I think you should take a moment to hear from a kid named C.J. I hope the world C.J. envisions becomes a real thing someday. It sounds pretty terrific to me.

In 2012, I moved into a small studio apartment on East Avenue in Rochester, N.Y.

Rent was $495 a month and it was worth every penny. There was a family of rodents living there before I moved in. There was a window that could also double as a guillotine. There was the noise of the garbage trucks just under my window.

Then, they renovated, and I managed to live with that, though not often gracefully. But the facilities were much nicer once they were through. I had to move down the hall. And my rent went up. Considerably.

The pull to living here was supposed to be the proximity to downtown. It’ll be really cool, I thought. I’m live right on top of two pubs and across from a gastrobpub. And I will have the best proximity evar to the annual Jazz Festival: It will be right in front of my house! How cool will it be?

Not very cool, it turns out.

Not very cool, when you come home from work at 8 p.m. Friday and can’t find a place to park in the garage you pay for due to interest in said Jazz Festival, and so you have to drive out of town to crash for the night. Not very cool, as you discover that your enthusiasm for the Jazz Festival is just waning, and you realize you’re paying to live in a shoebox for a convenience that just ain’t that convenient. 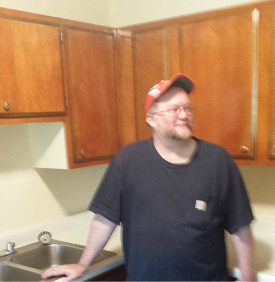 The author in his new kitchen.

That is changing. Soon.

In a week, I will move into my new digs, a one bedroom apartment with a terrace and a bunch more room than my studio downtown.

This here is me, yesterday, in my new kitchen. Which, you know, actually has counter space. Luxurious. Place has a terrace where one could sit outside and enjoy fresh air, has a dining area, has a bedroom. It’s like living in a civilized manner, in other words.

Rent is the same.

Speaking of working in the kitchen, here is a recipe for you:

How to make a quesadilla at home to use up that brie cheese and those two tortillas you have left over. By Aaron.

1. Heat up a skilet. Mush the brie onto one of the tortillas.
2. Shred some cheddar onto it as well.
3. Add some salsa.
4. Put the other tortilla on there. Smoosh it down a little.
5. Put it onto the skillet. Wait a few minutes.
6. Attempt to flip the quesadilla. Have half of the tortilla fold down so that the filling starts to fall out and onto the hot skillet.
7. Attempt to fix the problem by refolding the tortilla, making the same problem occur from the other side.
8. Curse loudly.
9. Dump the whole mess onto a cutting board and lean over the counter, eating with a fork and feeling like an utter failure.
10. Enjoy! 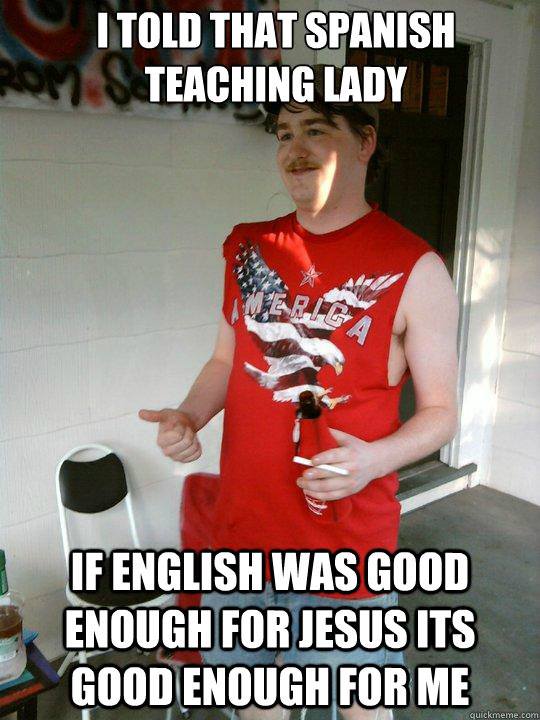 I didn’t mean to start yelling at people this morning. It just happened. I’ve been trying to be downright spoony about the fact that half of my apartment hasn’t had power since Saturday evening.

But there is massive renovation going on in my building. So I got out of bed early (10 a.m. is damned early for me) to inquire about the progress of restoring my power, and I came down to the eerily dark and ripped up lobby to find that the front office was closed, or rather, it had moved, and the location to where it had moved had a big ladder blocking it with a fella on top of the ladder changing light blubs. The girl was on the phone, rifling through papers, her eyes down, and there were two glass doors between me and the titular person in charge.

This would be my third inquiry since Monday morning, so yes, “what the f is this” were the words that found life from my mouth.

“I haven’t had power in my apartment for since Saturday, that’s what!”

My voice’s tone convinced me that I probably should have had breakfast before engaging in this encounter. But I was more pissed about perceiving that I was being ignored than I was about the power.

The girl fought her way to the previous office entrance and placated me well. She said she’d the fellas right up. I decided to get out of their hair, so I threw on some clothes and went across the street for some coffee and a muffin. I discovered that I make better coffee and better pastry than this joint, but it was pleasant to have found a table to sit outside, to take in the beautiful day, and to enjoy reading the local paper.

I was about wrapping up breakfast when a little robin landed on my table. He looked at me then hopped over to my muffin. He grabbed a crumb of it and headed off. The young ladies at the next table who were writing on staff paper noticed and laughed. “I’ve been burgled!” I exclaimed.

They still don’t know what’s wrong with my power, and, in fact, they may have to rewire the whole damned thing.

But I did learn one thing this morning: The birds are certainly brave this year.

UPDATE: Yay! They fixed it!

In case you were curious: There’s Been a Burnley. (According to sketch transcripts online, the inspector in this sketch is named “Muffin.”)

And now, for something completely different.

If you’ve ever watched Star Trek: TNG, you’ve seen this just like half your life you looked at the Federal Express logo and never saw the arrow. Well, friends, get ready. Because once you see this, the next time you watch TNG, THIS is ALL you will see.

I present: Riker Sits Down.

I was even inspired to write a haiku:

Riker mounts his chair
Like he is straddling mountains.
Engage, Number One.

Finally, here’s an interesting perspective I came across: Josiah Bartlet Was A Mediocre President. Read the article, but don’t miss the comments.