I think a kid like that misses out on some socialization. He’s constantly introduced to new already established social constructs and has to do a lot more clawing and put up with the hazing. 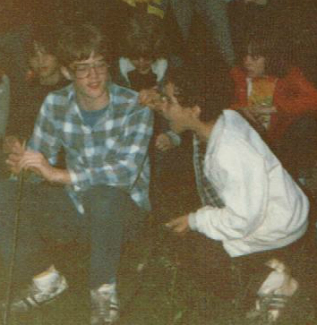 A kid like that is the odd kid out, and he knows it.

In fifth grade, I found another kid who was in the same boat. Fred Thomas. For much of the rest of our careers at Holden Elementary, we were best buddies, I think in large extent to that we both felt like the odd guys out. He, too, was new in the school having transferred I believe from the local parochial school. He was also biracial, something I’m sure he had to find his way through at the time. And, he was, like me, somewhat of an odd guy who I think felt a lack of foundation.

Fred could flip. I will never forget the day he demonstrated this in the playground. He jumped up in the air, flipped, and landed on his feet. Quite the athlete. But I never knew anyone more earnest than Fred. He was a nice guy. A genuine guy. I liked Fred. You had to.

He and I went to different social circles when we went to junior high as does happen. But I am full of gratitude for Fred for agreeing to be friends with the other odd man out, because I’ll tell you, at the time, I didn’t have much else.

I found out today that Fred has died of cancer. A good friend, a good man, and, once upon a time, my best friend.