Trade shows can be rough, man.

I spent a large part of my, you know, “career,” expected to attend a trade show once per year at least. The thing about a trade show is that you’re always working, and yet, there’s always a little tinge of par-tay in the air. Because the food is good. And there’s always some booze handy. And, as I may have mentioned, the food is really really good.

But the point is, from the time you leave your room to the time you return to the room to nurse your feet and to shower the flop-sweat from your leg-pits, you are working. You’re either proctoring a workshop or attending one or even tidying up the registration area.

And I don’t know about you, but I have a cardinal rule about work. I’m not a prude about language in my private life (as one might assume from reading this), but when I’m at work, I do not even KNOW those words and I strive to avoid the conversational topics of sex, politics, and religion.

Having said that, I’ll tell you what, there’s a guy who apparently got fired for a really dumb reason.

Hi, I’m the guy who made a comment about big dongles. First of all I’d like to say I’m sorry. I really did not mean to offend anyone and I really do regret the comment and how it made Adria feel. She had every right to report me to staff, and I defend her position. However, there is another side to this story. While I did make a big dongle joke about a fictional piece hardware that identified as male, no sexual jokes were made about forking. My friends and I had decided forking someone’s repo is a new form of flattery (the highest form being implementation) and we were excited about one of the presenters projects; a friend said “I would fork that guys repo” The sexual context was applied by Adria, and not us.

Anyway, if you’re remotely interested in this, check the MeFi thread. If you’re not, well, I don’t blame you.

After all, the only reason I posted this was so that I could use the phrase “big dongles.” 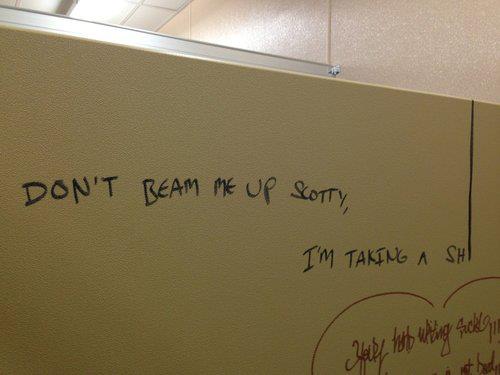 This story says a lot about us, about capitalism, and about how guys make a buck these days. Also, people, come on: LEARN COOKING.