(I thought before that I knew how to use the iPhone’s panoramic lens. I didn’t. Until today. I was holding the phone incorrectly! This is pretty much the full view from the back deck of where I get to stay in Edinboro. This image is clickable to a larger view. Just click on it!)

The great musical movement that partially was born in my high school a generation behind me was called Devo.

That of my era was called The Twist-Offs.

It was fun to go to a Twist-Offs show and jump up and down a lot. They made music that was excellent for jumping up and down. But not only was it good for jumping up and down. It was good music. Well-considered arrangements. Horns. And actually thoughtful, imaginative lyrics. I am a Twist-Offs EVANGELIST. And if I still lived in Kent those boys would have had to put up with my funny face and my set list thefts now for decades. I think they play periodically in Northeast Ohio, but these guys had a real live indie record deal. I even heard one of their songs played as background during MTV’s The Real World once.

Anyway, I think they were playing KentFest once or something, and they were handing out some tchotchkes. These: 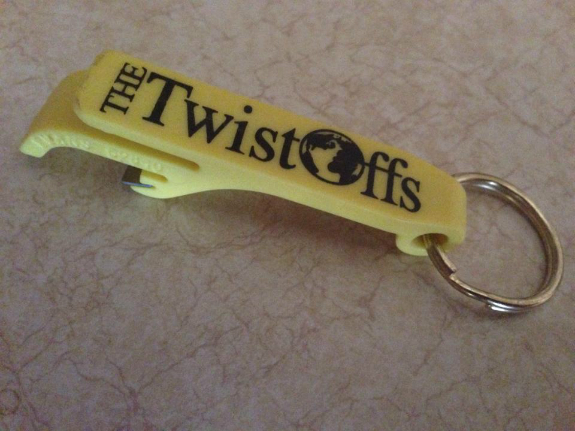 I owned two of these. One was orange, and that one I made the mistake of using as a keychain. The band’s logo wore off. Luckily, my Dear Mother was in possession of this one all these years, and it has remained unblemished. She released it into my possession today, along with a boss collection of 45s (including some old joints from Illinois Jaquet and other Apollo artists, records I’ve been hunting down for years) and a rather interesting edition of the Akron-Beacon Journal from May 24, 1970 that I may mine for blog entries later.

So Mama brought me a treasure chest to Edinboro. Thanks Mama.

Speaking of legends who attended the same high school as did I, John Uhrich was and is one of the best drawers with whom I have shaken hands. You should visit his blog, Duck-Duck-Gorilla. The guy has apparently just started drawing comic strips to “brush up on [his] digital inking skills.” (Cough HUMBLEBRAG) Watch out, Pastis! 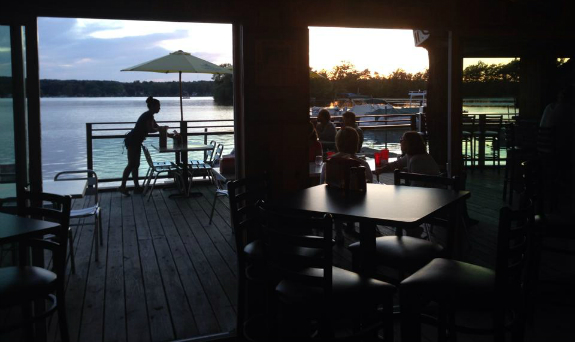 This is the Sunset Grill at the Edinboro Lake Resort. As you can see, it does what it says on the tin.

Serves sammiches in baskets with chips. Which is fine, and the sammiches are good, but one would think the food could match the stellar ambiance. Still. I love this place.

The Crossroads Dinor has dropped the “Dinor” and seems to do everything it can to shy away from being a diner although it has the diner car. Oh to walk in there and be able to order an open faced roast beef sammich with fries flooded with gravy. But that ain’t on the menu.

No shit on a shingle for you.

And you don’t want these fries. The place prides itself on fresh-cut fries, but they don’t really know how to cook them.

My suspicion is that they’re circumventing the step of soaking the taters first to leech out some of the starch. These fries are rubbery and weird.

Get the applesauce instead.

The best meal out of the week so far has been at the Empty Keg. Burger. Steak fries, probably from Ore-Ida. Which were delicious.

And, where they served me a true Iron City beer: 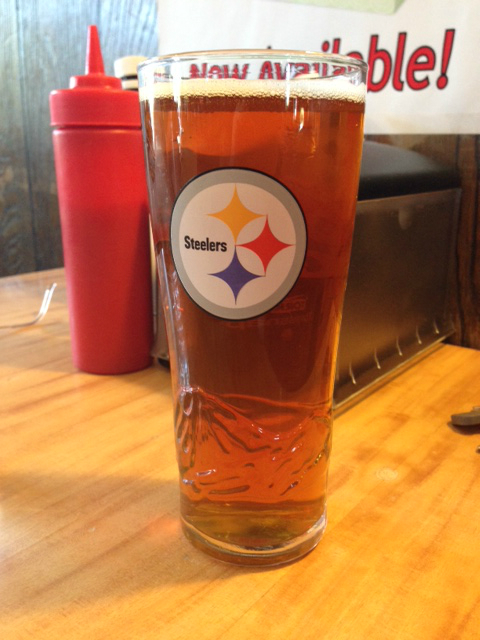 Okay, it was a Sierra Nevada. But I have to wonder how many of these glasses walk out of the place under somebody’s jacket.

I said best meal “so far.” We have yet to enjoy my departure breakfast at Flip. That my friends is the finest food in town. Can’t wait.

(When Flip Cafe was opening, my then nearly 90-year-old Grandma DID A SOMERSAULT IN THE AIR in the middle of the sidewalk when we discovered it. She really did. I watched her do it. She jumped up in the air, kicked her legs around, and landed on her feet, and then she gave out this sort of guttural “WHOOP!” Because, you see, her Dad’s nickname all his life, or at least as long as I knew him, was “Flip.”

Okay, she didn’t really do that. But she sure was excited about that particular serendipity.)

The evening ended for some reason with me describing to my Mom and Grandma the famous incident on The Carol Burnett Show with Tim Conway and the elephant story. I can’t do it justice, so here, go see for yourself.

Thus, the title of this blog entry.

I’m sure I’m not done documenting my last summer trek to Lakeside of the year.

Gosh I need to moisturize.