I didn’t when I first encountered the story. The story shocked me so, that a company would actually be selling this 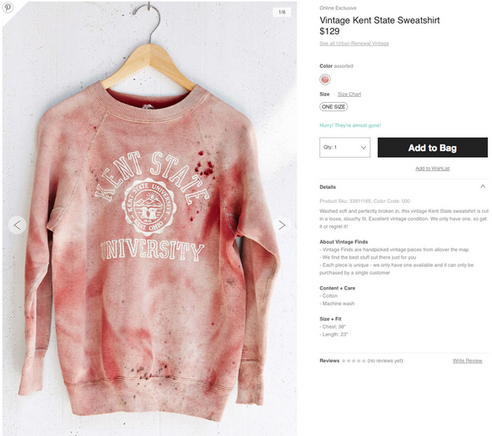 and I was even more incensed knowing that, in fact, Allison Krause’s wounds were under her left arm.

This was Allison’s shirt, I believed, or, at least one that was designed to mimic a shirt she might have been wearing.

Cooler head has prevailed, however. Look at the seal.

That’s the seal of the state of Ohio.

Kent hasn’t used that seal on merchandise since the mid-1960s.

Go look on eBay. Google it. You will not find a Kent State shirt anywhere that uses the Ohio state seal. You can barely find merchandise that shows the Kent seal; I think they tend to reserve that for administrative communications.

I hate to say it, but I’m thinking the shirt is genuinely vintage.

But I don’t think this was done on purpose. I think it’s a simple case of decisions at a retail establishment not being made by someone who is astute and discerning enough to know.

Now that I’ve calmed down, however, I just can’t imagine that they did it on purpose.

Not sure if that helps.

I have to add that I was surprised and pleased at Kent’s proactive statement.

May 4, 1970, was a watershed moment for the country and especially the Kent State family. We lost four students that day while nine others were wounded and countless others were changed forever.

We take great offense to a company using our pain for their publicity and profit. This item is beyond poor taste and trivializes a loss of life that still hurts the Kent State community today.

We invite the leaders of this company as well as anyone who invested in this item to tour our May 4 Visitors Center, which opened two years ago, to gain perspective on what happened 44 years ago and apply its meaning to the future.

Whoever is running the joint now are not the same people running it when I was there.