This is my new favorite thing. I mean like ever.

(Original video is at Liveleak.) 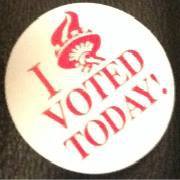 I come from nowhere, and you should go there. Just try it for a while. The people from nowhere always smile. Their eyes are all frozen over. The sides of their faces pooch out at the corners because that’s what happens when their mouths turn up on both sides, which is why we can tell they’re smiling. They never frown. They never let their eyebrows turn down. They like going around with their teeth showing all the time. They are from nowhere. Your teeth are showing, so maybe you been there! You could have the disease of nowhere people, where the air gets stuck all over their gums—when their nowhere lips roll back. For real excitement, they stand still. They shut up. Then they don’t do nothing out there in nowhere!

“But when a Democratic candidate goes out and explains what the New Deal and Fair Deal really are — when he stands up like a man and puts the issues before the people — then Democrats can win, even in places where they have never won before. It has been proven time and again.”(Harry Truman)