“I’m Leaving It Up To You” as performed by Dale & Grace was the first duet ever to replace another duet at Billboard’s #1 position. It unseated Nino Tempo & April Stevens singing “Deep Purple.”

That ascendance made “I’m Leaving It Up To You” the number one song in the United States on November 22, 1963, the day that John F. Kennedy was assassinated.

In fact: “Dale and Grace were in Dallas on the day of the assassination and scheduled to perform that night as part of Dick Clark’s Caravan of Stars (with Bobby Rydell, Jimmy Clanton, and Brian Hyland), and moments before the assassination had waved to the president’s motorcade from a vantage point near their hotel.” (Wiki)

(And Lincoln’s secretary Kennedy warned him not to go to the theatre… ::rimshot::)

The song Dale and Grace took to #1 on that fateful week was also covered in 1970 on Linda Rondstadt’s Silk Purse and in 1974 gave Donny and Marie a #4 hit.

Now, I know that this, the second day of Zappadan, is when I usually gush about a certain superstar named Richard Wayne Penniman. It is, after all, the birthday of the man who penned “Directly From My Heart,” and, don’t get me wrong: Little Richard deserves praise on his birthday. (Happy birthday, maestro!)

But I don’t think I can outdo my effort from last year.

(You may want to take a moment to go read it. It is the best thing that I have ever written.)

So this year, I thought I’d talk a little bit about the man who performed “Directly From My Heart” on Weasels Ripped My Flesh, and one of the writers of the oddly important song “I’m Leaving It Up To You,” Don “Sugarcane” Harris.

Here is a picture of an excited young man holding what I’m sure was one of his very favorite record albums. 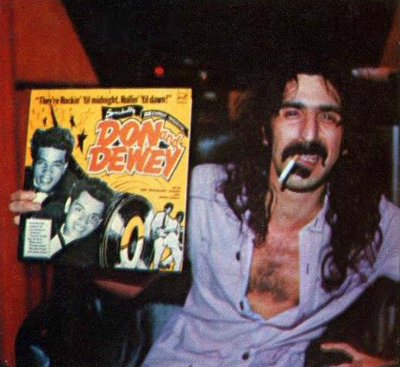 The record, They’re Rockin’ Til Midnight, Rollin’ Til Dawn, has the following track listing (thanks, AllMusic):

You see a couple of hits there, though none really so much for Don and Dewey. The duo themselves never really established much in the way of hits. The Righteous Brothers got quite a use out of “Koko Joe,” “Justine,” and “Big Boy Pete.” The Searchers and The Premiers took on “Farmer John.” But by 1964, Don and Dewey as an act themselves was pretty much finished. They played in Little Richard’s band for a time and then were out.

It was Johnny Otis who inspired the incomparible Zappa-stache, and it was he too who dubbed Don Harris as “Sugarcane.” And it was while playing with Otis that Harris figured out how to amplify a fiddle.

“Frustrated because amplified electric guitars generally drowned out the sounds Harris coaxed from his violin onstage, Sugarcane took a crystal from the cartridge on the arm of a record player, connected it to an amplifier with a wire, and taped it to the wood of the violin.” (Midnight at the Barrelhouse: The Johnny Otis Story, p. 129)

It was Otis in fact who helped Frank Zappa track Harris down during the Hot Rats sessionsâ€”he was in jail. Zappa bailed him out and recorded him.

In the process, he revived Harris’ career. I mean, check it: Harris’ solo discography doesn’t even start until 1970, the year Weasels Ripped My Flesh and Burnt Weeny Sandwich were released. And you can land on any of those records and experience Harris’ performance on Weasels or Burnt, distilled.

(That is exactly as many albums as Van Halen and Van Hagar put out before the disastrous VHIII! Quite prolific!)

1973’s Keyzop is a great place to start. Here. Go get your headphones.

And, of course, on this.