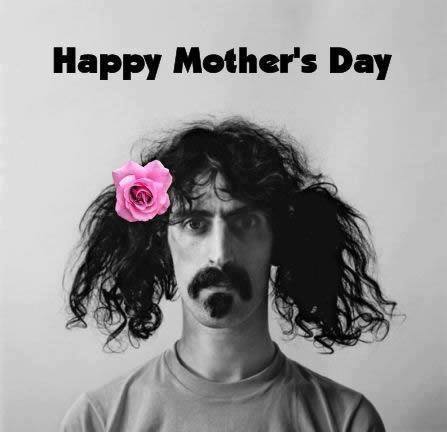 The lore is that the band known as The Mothers was christened on Mothers’ Day. I guess. I mean it sounds like the kind of story that could have actually happened or the kind of story that a man keenly interested in writing his own story largely would later tell. I don’t know. Then again, it would certainly match the AAAFNRAA creative model.

So yesh. Mother’s Day, which, with the new job I actually get to do something about since I don’t work Sundays. I mean the greeting cards went out last week of course. Say, have I mentioned to you Aaron’s rule of shopping for greeting cards?

Do not. I repeat. Do not take longer than two minutes to select a greeting card. Ever.

Reason one being of course, that one should not spend one’s precious life moments furrowing one’s brow trying to decide between sending a loved one the puppy or the kitty greeting card. There is, however, a better reason than sheer laziness: It is more effective.

If you don’t see the greeting card you seek in two minutes or less, you have simply not found the right card and you should move on. You approach the greeting card aisle generally aware of the level of sentiment or humor you want to impart and generally what message you wish to communicate. Either the right card will leap at you or you have not found it. Setting a two-minute deadline for yourself prevents the second-guessing, the hemming and hawing, strategies that are guaranteed to help you choose a milquetoast, inappropriate greeting.

Just a little unsolicted advice from me to you. Filed under Hints from Abelard.

So, yes, I woke up this morning and got myself together, then walked to Hart’s to grab a few victuals, including ground beef to later this week make some Sloppy Joe, some burger patties to boot, some Ithaca Farms ogrets, and a few other essentials, including beer. I then returned home and drank one of the beers and called the matriachical figures in my family to wish them good tidings. Then drove out to the farm and ate meat with the family. Stepmom recalled her formative training in muckraking hilarity, remembering when she was young and her Mom would drag her to protest the Tocks Island Dam. Fitting, since Mother’s Day originated not so much as a greeting card pusher’s fantasy but as a tribute to one mother’s peace activism.

Seriously. Go look it up.

Then Dad and I sat down and watched one of the truly great and utterly overlooked movies of 2014: Chris Rock’s Top Five.

I could not help but draw comparisons between Top Five and another of last year’s offerings, Birdman: Or (The Unexpected Virtue of Ignorance), which was for some reason quite critically acclaimed. The premise is similar, actor who previously found immense success with schlocky roles tries to pack on some credibility. The difference is that Chris Rock’s film is a likeable, accessible, smart, ribald, and funny movie, while the Michael Keaton vehicle was a self-indulgent, horrible piece of poo that I hated so much that I resented it for keeping me in the theater.

I could watch Chris Rock and Rosario Dawson banter for an entire film, which is fortunate because that approaches at least half of it. (Ah, let’s face it, I could watch Rosario Dawson do anything for any length of time. But that’s beside the point.) The banter introduces the movie and drives the story forward throughout, and it is a joy to watch. The writing is excellent and the cameos will keep you standing and pointing.

How that Birdman piece of crap garnered Best Picture and this thing only got a nod from the Critic’s Choice Awards is beyond me.

I know. Too many white guys. What can I say. My sixth would be the word famous Beastie Boys to completely ruin it. Oh well.