Am trying to shop more these days at the Aldi store.

Took a leap of faith today and purchased a roast from there, and it resides currently in my slow cooker with a stick of butter, one envelope of ranch dressing mix, five pepperocinis, and one envelope of gravy mix. Easiest recipe in the known universe.

Now Aldi is over on State Street. I drove over and had to take a bit of a detour because Rochester Police had taped off an entire block. I assumed they were investigating a murder.

I sure do hate to be correct about such things.

Oh well. What can I tell you about a shopping trip that cost me $60? And that included a roast. Did I mention the roast? Smells good in here.

So I thought I’d talk a little bit about speeches.

Before I was sent out the door with my box at a previous job, I’ve seen some of these speeches they give. I’ve seen Condoleezza Rice speak. Al Franken. Bill Bradley. Bill Clinton. One of them astronauts. The Capital Gang. Freddy Mercury. Just kidding.

And what I can tell yinz about those speeches is that they’re rather unremarkable. Their purpose is to put butts in seats. They are not particularly informative nor educational. Most of them are canned speeches the person tells at dozens of events all over the country.

Except for Bill Clinton. When he speaks, they turn off the teleprompter.

For the most part, though, these speeches are pablum. They are crafted to fill up an hour so that the event’s attendees can say they saw so-and-so at the whatsit convention or meeting. So they can, for example, say they shook Bill Clinton’s hand. Wait. That’s my story.

My point: Those of you who are losing CTRL over your bowels because you are dying to see the transcripts of Hillary Clinton’s speeches to various groups are going to be incredibly bored. There will be nothing there. I rush to mention that these speeches are not part of the public record and that the Secretary may have no legal claim to actually release these transcripts, of course.

Besides, here’s my real problem with the “speech-gate” nonsense: Hillary Clinton may have spoken to Goldman Sachs, but she also spoke to my former employer, the nation’s premiere trade association for the scrap recycling industry. (You may remember it. A lady threw a shoe at her.)

Does that mean that our nation’s for-profit recyclers are in Hillary’s pocket too?

If so, why did she shift on TPP? I guarantee they would not like that.

Reckon they wasted they money, eh?

So, here’s a hint from Abelard.

I have a folder on my desktop called “Instant Trash.”

See in the olden days, I’d see a picture or a meme or something I wanted to share on the FacedBook. And I would need a place to save it first. And generally, I would save it on my desktop. Which made my desktop messy.

Now, those files go into “Instant Trash,” which I know I can delete the contents of which any time because those are files I did not mean to keep long, just long enough to put up to FacedBook. Thus: “Instant Trash.” 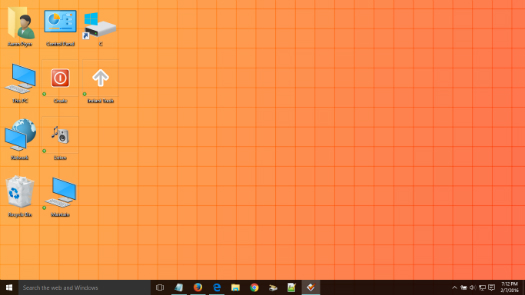 One day, humans will evolve to possess exoskeletons impervious to bullets. Which will leave some damned frustrated rednecks in more ways than one.