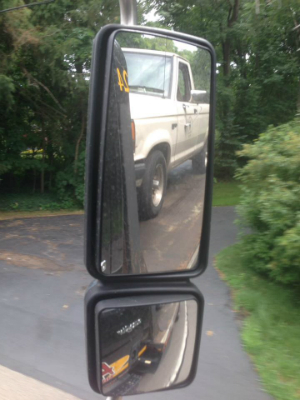 This is a dead pickup truck.

Dead. Zilch. Not pining for the fiords. No va. A Ford Ranger that no longer, um, ranges.

There is nothing like having the truck you’re traveling in die on a busy interstate road. Yeah. Pretty terrifying.

So, today was moving day. Out of the crappy shoebox, into the comfy one bedroom. The movers showed up promptly at 8 a.m. They had me out of my old place in two hours in into my new place by noon. Feeling confident having knocked that sucker out pretty quick, I joined my DOD for lunch at Bar Louie down the road. This is thanks to Sheridan Bros. Moving, by the way, they were excellent.

Bar Louie is pretty froo-froo. DOD had the booger. I had the salmon sliders. The girl who served us at the bar was not born. She was created in a laboratory. It is an utterly nice place, and I do not often feel comfortable in such places. I think the Bush twins would enjoy it very much, however.

So the movers didn’t take my R2-unit (my portable air conditioner) because it was full of water, and I had no idea how to get the water out. I didn’t want it anyways. My new place has a nice wall unit that I am enjoying as I write this entry. So, I offered it to my DOD in support of the family’s favorite cause, No One Left Behind, which in Rochester is basically my Rebel Girl Mom (we have always been uncomfortable with “stepmom” so I have just now decided to refer to her as my Rebel Girl Mom instead. She knows why.) and her husband, my DOD. Basically, NOLB provides assistance to fellas from Afghanistan (and their families) who helped the United States during the war by acting as translators. Said gentlemen are now targeted for death in that country and need whisked out of said country ASAP. Remember that when Donald Orangefartblossom craps all over immigrants. These are folks who helped us and who now need help landing gracefully in these Untied States.

So my DOD drove the Ford Ranger downtown with me to secure the AC. He helped me drain it, and we loaded it on the truck. We got as far as past the Pittsford exit when the truck stopped. Dude was able to pull to the side, but it’s a busy road.

We were both pretty terrified.

So here’s the amazing thing. For 17 years, my now departed Grandma G (I will be addressing that soon) has purchased me a membership in AAA. My DOD’s had lapsed, but I still had mine and had my card on me. I called. The agent was helpful as could be and in fact put a priority status on our ride since we were in a bit of an unsafe situation.

So, back to the farm. The agent on the phone was cute and trying to get us to take the truck to a garage. Very funny. Let’s take a 21-year-old pickup truck with a shot transmission to get repaired. Nope. We just carried her home. Said a few sacred words. Misted some smoke over her. Read the kaddish.

DOD drove me back to the new place. I set up the futon and moved some crap out of my way. I realized I didn’t have any food (one leftover salmon slider and some hot dogs weren’t cuttin’ it). So I went to get wine and frozen pizza (what else would I want after a move?) and came back, expecting to set up the TV and spend the evening chilling.

Except I couldn’t find my shoes.

I’m working tomorrow (dummy. should have gotten PTO tomorrow, too.), and they would not approve if I showed up in Crocks.

Sigh. Back to the previous residence. For shoes. Grabbed a few other things too, of course (there’s always a bit left behind after a move, a fact meant only to add to the annoyance level of one of the most annoying events a human being ever experiences).

So. I did that. Drove all the way back for shoes. And the croissants I’d bought. I got back in and moved a few other things around and

There’s this windows store (windows like that glass hole in the wall, not like the operating system) that advertises on TV here, and the guy says his windows are so great, and then he stands on a window, and then he goes, “I not only stand behind my windows, I can stand on them.” And then he stands on this window that’s elevated by two beams. Then he goes “Can you stand on THEIRS? Maybe. But it’ll cost ya.” And believe it or not, the guy is not Donald Trump.