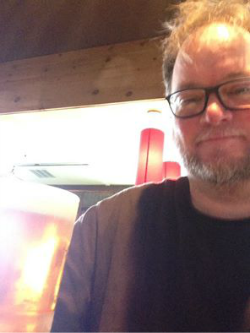 So now I wear bifocals.

I’ve been meaning to take care of the glasses thing for a while now. Have been aware for some time that not only am I nearsighted now, but I’m farsighted, too. Got up this morning and decided to run over to Lenscrafters and get it all settled. Ran over, got my eyeballs looked at, picked out the frames, not to mention a pair of Ray-Bans. Came home to my new apartment and did a few things, then got the text that the glasses were ready. Drove over and got my oil changed. Walked to Bar Louie for a beer while that was being done. Then picked up the car and went and got my ears lowered. Then over to the farm for supper. Where my brother whipped up a perfect dish of greens and beans.

And he educated me about a musician named Paul Gilbert. A guitarist I had not encountered yet. A guitarist with the balls to cover Loverboy.

What perked my interest in Gilbert was to learn that he worked with Billy Sheehan in Mr. Big. Billy Sheehan, as in, the dude who did those amazing things on the bass guitar on Eat ’em an Smile.

I didn’t tell my brother that David Lee Roth is the only reason I know who Billy Sheehan is.

Brother made a mean greens and beans. In case you’re not familiar with the dish, which is an upstate NY staple, here’s how it goes. Dice some onions. Get some nice Italian sausage and roll it up into balls. Cook those things. Throw in a few cans of pinto beans with all the juice. Season. Then throw in a bunch of greens, such as spinach, cale, or chard. Allow the vegetables to wilt.

Serve with lots of bread and wine.

That’s what I had for supper and yes, you are jealous.

So then DOD and I retired to the TV room for a movie. Whiskey Foxtrot Tango starring Tina Fey.

Friends, I have not seen such an intelligent, funny, wonderful film in a while. I think I would put it next to Jenny Slate’s Obvious Child in terms of its sheer excellence. One of my favorite films recently. You should watch it watch it now.

It was better than Birdman.