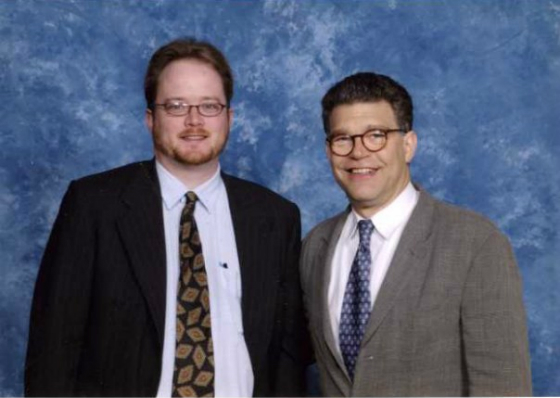 This was snapped in 2003 at a work function. I can verify for you that Mr. Franken was a perfect gentleman.

My go-to joke about this photo is to say “I’m the one on the left.”

But there aren’t many jokes these days regarding this guy, are there? Dude’s been caught up in this MeToo net with all the rest of the throwbacks. It’s a shame. I don’t know enough to talk to you about his record, but I think these Twin Cities journos have done a pretty tight job of it. (I would highlight, for this context, pieces he contributed to the Violence Against Women Act of 2003.)

So, it’s a shame. But here’s the thing: It is not salient whether you believe Leann Tweeden and/or you DON’T find that the picture she released of Franken with his hands on her boobies like they’re radio dials to reek of SOMETHING’S REALLY FISHY HERE; or if you believe Lindsay Menz or the other two anonymous claimants here. Nor is it salient if you are a partisan Democratic hack (such as I) who might be tempted to defend Mr. Franken for worse than this, even, despite our most strident stances as feminists for women-broads for America.

None of this alters the fact that Al Franken not resigning from the Senate is the correct move here.

That, folks, is a positive referendum offered by the voters of Minnesota regarding the job Sen. Al Franken had done during his first six-year term. Were he to simply step down because he was caught up in this tsunami due to a few random stories and a really weird photograph, it would be a detriment to the voters who returned him to office.

No, what Sen. Franken has indicated will be done is the proper salve here: A Senate-based ethics investigation into his behavior. We tend to forget in this maddening political environment that government does not take action by tweet or by some maniac’s bark. Government requires a proper process. We have a senator here who has some accusers during a time when accusations are pouring torrentially. This senator should get a fair hearing, and the correct vehicle for that hearing in this case is a Senate ethics investigation, which was, by the way, suggested first by Sen. Al Franken.

How does this compare to the case of Rep. Joe Barton of Tejas, who recently had a photo surface of him presenting his wares via digital shutter-cluck?

Goodness, if I have to explain to you that, by definition, sending a woman a picture of your ball peen hammer IS sexual assault, then let’s you and me spend that same conversation discussing shit and shinola.

No woman wants a picture of your junk. Not one of them. Not one. Okay, maybe except for that one, the one who plans to use it to blackmail you later. Generally, however, sending a woman a picture of your grumpy muffin there is an unwelcome violation. I can’t believe I have to explain this. Let’s next talk about why little people are prickly about dwarf-tossing.

I mean jeez, send a nice bucket of tulips instead, maybe?

As for Sen. Franken, who today again offered a contrite statement and a resolution to do better, his case is more nebulous and requires investigation. And that was his idea. It is the proper process and should proceed. His immediate resignation would be a picador’s work to the fleshy bits of democracy.