One “holy grail” of my existence has always been to achieve excellent reception of free, over-the-air television that includes at least the four major television networks if not a few more.

I’ve tried to get there for years and have never quite gotten there. There was always some pixelation, especially on the most vital of the television networks, ABC, which is the home of the greatest television program of all time, Shonda Rhimes’ masterpiece known as Grey’s Anatomy.

If I can’t watch Grey’s on Thursday night, it ain’t TV, and I ain’t havin’ it. Sadly, if there has been a station that gives me trouble, it’s ABC.

My solution of late has been the streaming service YouTube TV. These streaming service have come a long way in the past five years; I remember trying to stream Food Network on Sling TV when they first started and suffering paralyzing latency. Today, these services are more reliable as the companies have apparently invested in server farms to catch up with bandwidth requirements. Services I generally recommend, depending entirely on your need for content: Sling TV. YouTube TV. And Philo TV.

But still. That isn’t the grail.

See, in June 2009, the United States changed from over-the-air television in analog form to digital. In this age where every square inch of everything is considered a commodity for sale, I’m astonished the federal government any longer makes an effort to maintain airwave broadcasting.

The Federal Communications Commission was founded, after all, on the sparse premise that the airwaves could not be owned and therefore required federal regulation as a vital part of the commons. Thus, from the original mission statement of the FCC: “make available so far as possible, to all the people of the United States, without discrimination on the basis of race, color, religion, national origin, or sex, rapid, efficient, Nationwide, and world-wide wire and radio communication services with adequate facilities at reasonable charges.”

So I reckon the way I figure it, a person ought to try to use the public airwaves if one can. So I have always tried to use OTA TV if possible. So I’ve spent years at the window fidgeting with an HD antenna.

Then, this week, I came across this website. And I figured out that most of the broadcast towers relevant to my needs are either due south or southwest from my apartment.

My windows face almost due north. 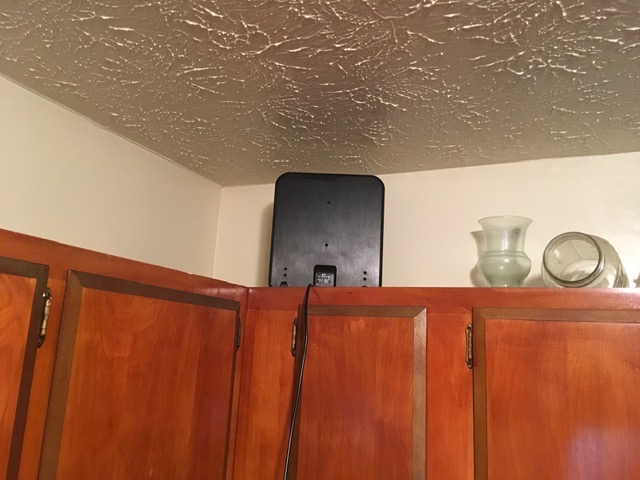 This is my antenna, facing southwest.

I have never had a clearer OTA picture, ever.

P.S. If you’re on Facebook and interested in cord-cutting strategies, you must join the group called Cord Cutting Tech Support. Search it and sign up. It was being in this group and reading the posts and helping other folks there too that led me to these conclusions and helped me resolve this egregious error. Yer welcome.