As it often happens, MSNBC’s Rachel Maddow went the extra mile last night on reporting an ongoing story. I mean, you all have heard by now about the doctored presidential seal and how hilarious that was, yeah?

Rachel had the b-roll for the event itself, which was something called “Turning Point USAâ€™s Teen Student Action,” which she refers to as a “right-wing youth group,” which, if yinz know your history at all, is a rather terrifying turn of words as it stands. Anyway, you can go watch Maddow’s treatment of this story here.

So, watching the thing, it occurred to me that another story got missed. Have a look: 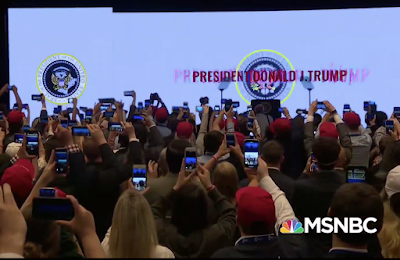 Now, bear in mind, this entire introduction is astonishingly stupid. I keep saying that Trump does stuff like a guy who’s a six-year-old who thinks that’s what the Presidency isâ€”the July 4 spectacle being the most prominent example. This AV nightmare also reflects that; it’s a dark, militaristic nightmare of a piece meant to make this small idiot feel like Thor. But checkout the screen capture above.

Trump has emblazoned his name in huge red letters on top of the relatively tiny (un-fake) presidential seal.

We can be fairly sure this violates the official style guidelines on use of the seal, and we can be even more sure that this is an abomination. It elevates the man above the office. It is gauche and shitty. And it certainly tells you everything you need to know about how this asshole perceives the office and his role in it.

One of the largest problems with the Trump presidency is that he neither understands nor respects the office. I have never seen a clearer visual representation of this truth.

Digby sez: “The people need to keep up the pressure on their representatives. They are all going home for the August recess and they will be available to their constituents. If you have the ability to go and see them or contact their local offices to demand an impeachment inquiry, now is the time to do it.”