As I noted before in this space, there was a happening in the little lake resort town where I spent the best summers ever as a kid. Edinboro for many years relied on these cement obelisk figures to indicate names of streets, white background with black text. But these were supplanted some years ago by real street signs that I assume would be easier to read from, say, the cab of a fire truck. But the little white towers remained.

This summer, these became a painting project. All yinz had to do was to claim a post and you would get to paint it. My longtime neighbor Tom Brown didn’t claim one soon enough to get one in his neighborhood, but he did get a nice site down on Lakeside. And he painted it in green and yellow and black stripes, and I knew immediately that this was a tribute to Edward Van Halen. 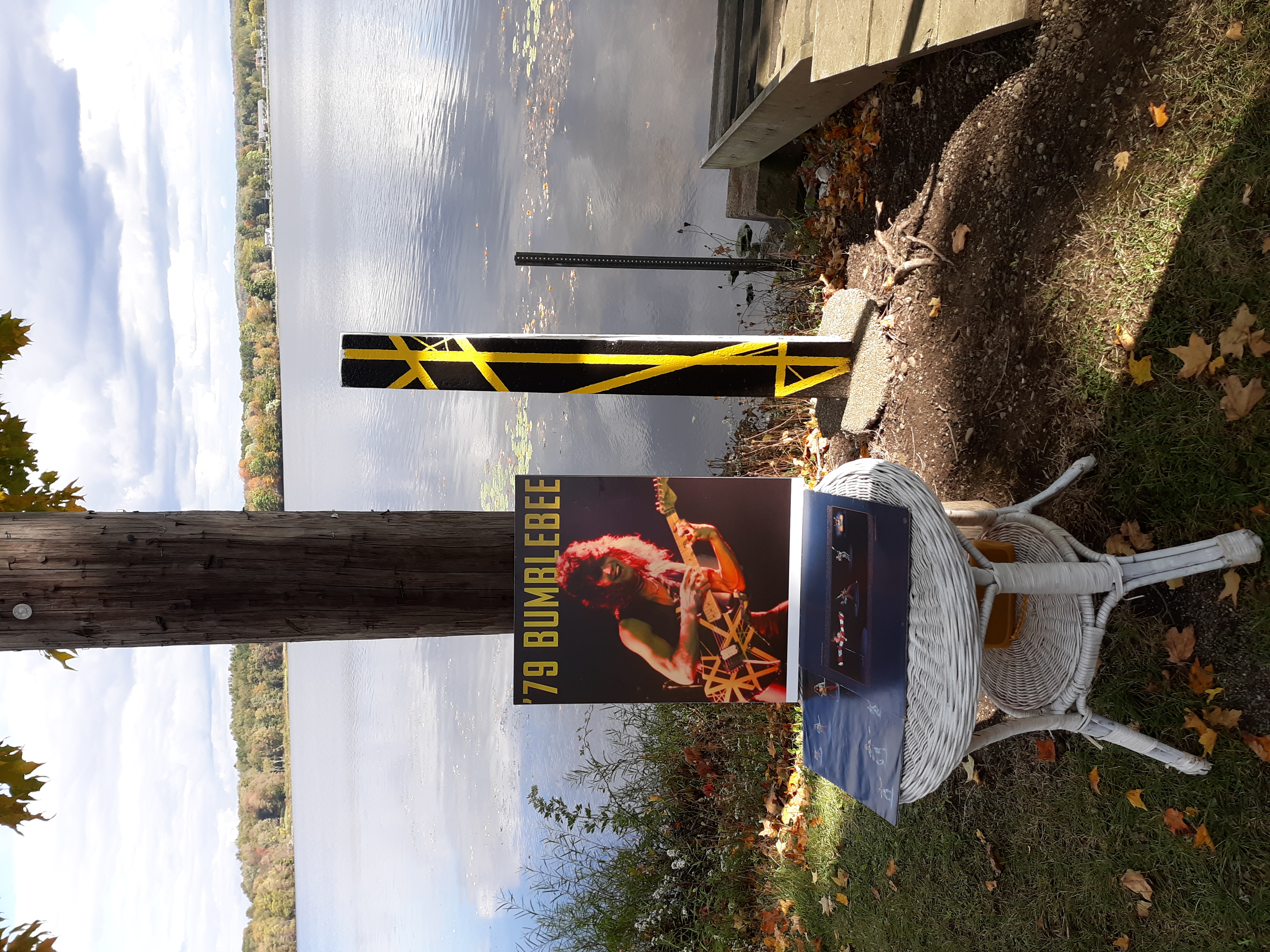 (Tom later included the poster during an artists’ tour to provide context.)

These posts were officially complete by early October. Tom’s post would be more timely than any of us would have liked. Edward Van Halen died Oct. 6. I don’t think Tom Brown had any sort of premonition. But I do wonder if he felt a disturbance in the Force or something. It would not surprise me. Van Halen fans are grounded like that.

My own encounters with Van Halen were initially fleeting; I remember hearing “Dance the Night Away” on the radio, that’s right about 1979. But I was fished in entirely in 1982 when the cover of Martha and the Vandellas’ “Dancing in the Streets” started getting airplay. There are things going on in that song sonically that just should not exist and I am certain had never existed previously. It would not be long until I would have a homemade cassette of Diver Down playing from my boom box, sometimes strapped to my back as I biked across town to see friends.

And there was a lot of catching up to do. Van Halen. Van Halen II. Women and Children First. Fair Warning. Soon these cassettes were gobbled up regularly by me, often with bulky headphones on and turned up loud. How else are you going to dig “In a Simple Rhyme” as thoroughly as possible? And Fair Warning, that was my leaf-raking jam. Not much else could help that drudgery pass like “Mean Street” through “One Foot Out the Door.”

Soon, Van Halen’s technique of hammering-on was highly imitated (and in fact, Eddie didn’t even invent it). Steve Vai comes to mind. The Zappa axeman was a Van Halen contemporary and recalled a visit from Van Halen to his own studio space.

“I was at my house in Hollywood, and in my studio, I was using my guitar, my rig, my pedals, my amps,â€ Vai says. â€œAnd Edward came in. We were just hanging out and talking, and he says to me, â€˜Let me show you this one thing I was working on.â€™

â€œAnd he takes my guitar and he starts playing and I realized instantly that it was Edward Van Halen. It didnâ€™t sound anything like me. It had that â€˜brown soundâ€™. It was everything we love about Edâ€™s tone. He was playing my exact gear, and it sounded like him.”

Later in the Guitar World interview, Vai copped: â€œI could never play like him. I never tried. Only an idiot competes with Eddie Van Halen.”

Because learning the technique is mighty impressive. Howeverâ€”and forgive me if this sounds a bit obviousâ€”being Edward Van Halen was something only that guy could do. He brought the technique, but he also brought the joy and the genius. I may tend to harp on Diver Down because it is not only my favorite Van Halen record, but it is my favorite rock album of all time. Funny that the brothers weren’t so fond of it. I mean what was Eddie doing when he laid down the guitar for “Dancing in the Streets?” I’m thinking he sped up the Purdie Shuffle and made it come out his guitar. Something like that. How else do you explain how he painted the air with those notes?

I think I adore Diver Down among other reasons because it sounds so analog and so basic. I feel like they ran everything through an Electro-Harmonix Memory Man, and it works. “Secrets” may be the most stripped down thing the Van Halens ever did, forward rock and roll, simple perfection on the guitar parts, Roth’s dreamy lyrics and vocals. And Diver Down birthed “Cathedral,” and the “Little Guitars” suite. I for one think Diver Down is Van Halen at its best.

Don’t get me wrong. I dove with all my might into 1984, which soon supplanted Mean Street as a companion to my Saturday leaf-sweeping drudgery. 1984 was like something you’d loved secretly for years and then, suddenly, it exploded and got all over everybody. Who wasn’t blasting “Panama” that year? “Hot for Teacher?”

Then came 1985, when we heard that David Lee Roth had left the band. And

Then came 1986, when the new big green album called 5150 was released. Sam Hagar introduced himself to Van Halen fans with a Big Bopper nod and the rest was history. Hello, baby! Indeed.

And so began the existential challenge of the Van Halen fan. What is Van Halen? Are you good with Van Halen led by Mister I Can’t Drive 55? Mister Three Lock Box? I don’t know about you, but while I enjoyed albums from the Van Hagar era, it was still like rubbing your earlobe 20 years later, wondering where that earring went.

I am skipping Van Halen III completely for obvious reasons.

In February 2012, Van Halen released its twelfth album, A Different Kind of Truth, and now today after learning yesterday that Edward Van Halen had stopped refusing to die, my appreciation for this album has blown up even more.

When I put this sucker on, I feel like I’m there again with my large headphones on, rockin’ out to “Love in a Simple Rhyme.” There’s something refreshing about Truth, a sense of familiarity. By the time I get to “Bullethead,” I think I realize it: This feels like a Van Halen album. Not 1984, not a Van Hagar era please-please-like-us-we’re-van-halen record.

This is why I am forever grateful to Wolfgang Van Halen, Edward’s son, who was reportedly quite the spark for Truth. Because I think the album provides quite the service to the average Van Halen fan. It provides context to the existential problem of Van Halen: What is Van Halen?

To me Truth reinforces what I thought all along. Van Halen is the brothers Van Halen and Diamond David Lee Roth. Other iterations may have had the brand, but this album brings new VH material to light and shows what the band can do when the correct energies are present.

Anyway. Losing Edward Van Halen this year was just icing on the cake I guess. Wolfie’s tribute is probably the best thing to end with. I look forward to seeing what else the kid comes up with.