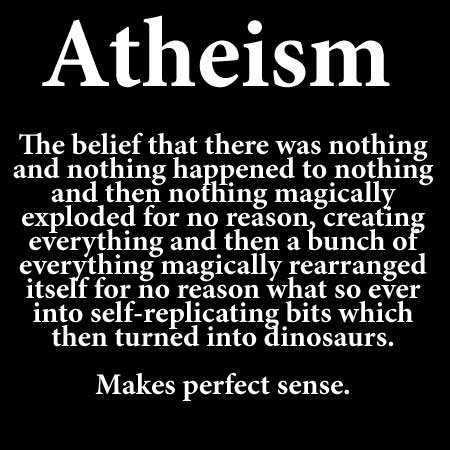 This may be one of the most foolish things I’ve ever come across on the Facebook. I didn’t want to go over and poop all over the wall of the person who hung it. That’s not nice and I often feel bad if I walk over to someone’s Facebook wall and smear excrement all over it. But I had to note it somewhere. Why not at the Adventures site, after all.

I’m not sure which I despise more about this garbage, which, if my sourcing is accurate, originated from the page of one Tony Hurlow, not sure which I hate more about it, the dishonesty, or the brash ignorance. Or do I simply hate that I can’t tell which vapid quality is driving this?

Beyond that, it is entirely presumptuous to assume that every person who rejects the notion of deities puts full stock of the universe’s origins into the hands of Georges LemaÃ®tre. I’m not certain most folks who are atheists give a G* about how this all came to be. Some may have become atheists simply so they could stop fussing around with it, all this hand-wringing about how the whole universe began. But I don’t know. Unlike Tony Hurlow and my Facebook pal, I don’t presume to speak for all atheists.

I can’t even tell you with 100 percent certainty if I am one myself.

But this little bumpersticker, it’s hardly the explanation of the Big Bang you’d consider adequate for a second grade class. It is a gross simplification of ideas that are so complex and shimmering that only a handful of people on the entire planet have actually ever grokked them. And those ideas are nowhere near as silly as that of the virgin birth, of the resurrection, of a guy flying from Mecca to Jerusalem on a winged horse overnight, of a guy out west chatting it up with Native American ghosts, that Jesus Christ was actually reincarnated as the Emperor of Ethiopia, that the creator of the universe is actually a giant spaghetti monster, that the Earth is actually the center of the universe.

This little slogan here, it lies. Atheists do not “believe” in the Big Bang and Evolution. Atheists prefer not to try to speak to an imaginary friend in the sky. That is all. But saying that Atheism is a religion is like saying that not collecting coins is a hobby. An Atheist may pick up, you know, a “book,” for instance, and read some ideas that scientists have developed to try to explain all of this, and he might stroke his chin and go yeah, that makes sense. That hardly means that the bloke thinks that Stephen Hawking is the Lord.

I can’t help but wonder, when I see something like this. Dude. If your faith is so great, if your religion is such a terrific product, then why do you have to sell it so hard? Just pray and believe and stop lying about the rest of us. I think that one’s in the Bible in there somewhere.

Oh, and one more thing. I mentioned earlier in this piece of a man named Georges LemaÃ®tre. He was the Daddy of the Big Bang Theory, though he’s not the one who coined the term. But he did first introduce the notion of what he called the “primeval atom.” Also, I should mention, LemaÃ®tre was sometimes addressed as AbbÃ© or Monseigneur.

He was a priest.

P.S. Some bonus footage I recently discovered. Here’s Neil deGrasse Tyson remembering how he met one Carl Sagan. This story reveals Sagan to have been one of the coolest dudes evar. Listen.

* This is part of an ongoing effort to encourage those of the humanist ilk to get away from the GD when you feel like letting out a good cuss and blaming the universal force that is A) Godless and B) More often than not the ACTUAL CAUSE OF WHAT MADE YOU WANT TO SWEAR IN THE FIRST PLACE. Gravity, kids. Use it as a swear, early and often. If you don’t believe in God, why blame Her?