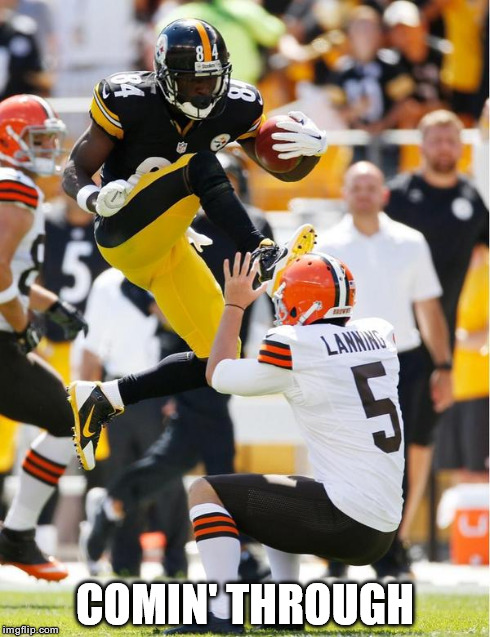 When I created this meme and posted it to Facedbook, the score was Cleveland, 3; Steelers, 27.

By sometime in the third quarter, Cleveland had tied it up, 27-27.

Beware the wrath from high atop the thing.

(Steelers ended up winning with a last-minute field goal.)

It’s not every day you get to add to a Wikipedia article.

In Popular Culture
Mentioned in season 3, episode 23 of The West Wing, “Posse Comitatus.” As Deborah Fiderer, played by Lily Tomlin, exits a disastrous job interview with President Jed Bartlet, she is heard to wonder: “Whatever happened to the Swingle Singers?”

Wish I could prove a new theory that Scissor Sisters were inspired by this combo.

My Dad and I have been wondering if Mr. Obama will have a LOBO second term, which stands for “Let Obama Be Obama,” which we of course co-opted from the excellent Stephen Sondheim show “The West Wing.” No, wait. Aaron Sorkin. I always get those two mixed up for some reason.

I believe today’s Inaugural Address begins to answer that question. If you’re a “Tea Party” person today, I hope you didn’t accidentally get within earshot because if you did, you probably began involuntarily clawing out your own eyes.

This was a speech about The Commons.

You know, once upon a time, the national debate centered on what to do with The Commons and how to best invest in The Commons. That was the basis of the political tug-of-war. In the past decade or so, however, we’ve left that relatively reasonable debate behind. Now we’re hotly debating whether or not The Commons should even get to exist. And the country’s troglodytes have decided that The Commons == Communism and therefore it should be ‘sploded.

That is not a reasonable debate.

More than anything today, President Obama affirmed his understanding that a country requires a Commons, that spending money on that Commons is not mere expenditure but is investment, and that a country is only as strong and powerful as is its Commons. He also, quite interestingly, peppered his speech with images and references to African-American history, referencing slavery and the great Martin Luther King. And, of course, he today historically became the first President to nod to the basic human rights of GLBTs as well.

It was a perfect speech. And, if it is any true indication of how this man intends to govern, well, Mr. McGarry, you might just have something there. 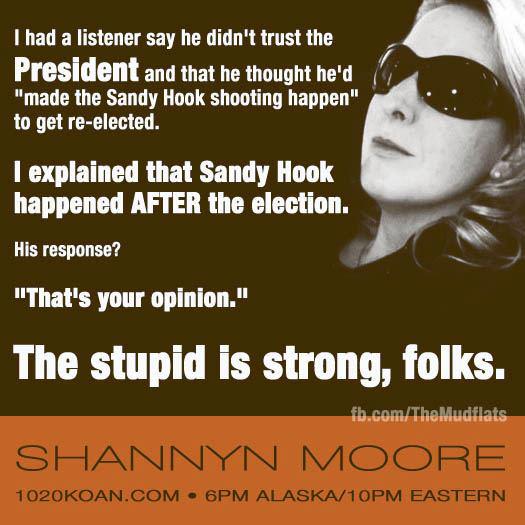 I deliberately left the television OFF last night to save the best television of the week for later, so as not to kick off my first week back post-convention on a lip-doodling, junkie-like vegetation at the hands of the cathode nipple. That’s what Tivo is for. However, thanks to the kind folks at the Stern Fan Network and HuffPost, I already have a pretty good idea what’s going on at The West Wing. The Interweb is EVIL. Evil, I tells you.

I am back in the office today. My plant was dried up because I fergot to aks anyone to tend for her. But she got an extra dose of water and will soon get some plant food. I have already filled the recycle bin nearly to the brim with crap I didn’t have a chance to git rid of because I was too bizy with convention crap. I have begun on one or three top-urgent projects. I have posted a “see you next year” graphic at the convention website and am formulating a new Web strategy for next year’s convention and an off-the-wall marketing campaign involving the New Orleans Zephyrs.

I was definitely feeling the crush about a month out, definitely feeling it hard, as I’m sure a lot of us wuz. But it’s over, and it was a hell of a fuk of a good convention. That is awesome. And it makes you get back to your office full of new ideas and ambitions and excitement and junk. And that lasts about three weeks, tops. But I like convention because of this buzz. It’s pretty cool.

Just stop telling me what happens on The West Wing, and don’t give me ANYTHING on The Sopranos or Grey’s Anatomy, riiiiiight? And, also, comment spammers, ya’ll can give up now. These comments is moderated, riiiight? Riiiiiight?

“Commander in Chief,” the new television show with Gina Davis as the first lady president, is a phone-it-in, predictible mess whose largest problem is that NBC’s “The West Wing” is still on the air. It’s like trying to market your own lumpy sugar turd water drink against Coca-Cola.

“The West Wing” is subtle, light, and expert at exposition. The first episode of “Commander in Chief” was obvious, heavy, and all about it. First this happened. Then this. Then this. From start to finish, you could almost see the actors ponder the blocking. Finally, it might help to create situations that are actually politically plausible. A conservative presidential candidate drafts a near socialist to the ticket? The Vice President redirects the entire U.S. Navy to save a single woman? The Vice President’s husband is also her Chief of Staff?

Predictible, predictible. The prompter snaps off and the mean, evil Speaker expects her to be flummoxed, but the amazing new President pulls a Bill Clinton and gives a flawless speech anyway! FU, man! I’m the PRESIDENT!

Save your Tivo time. The show to watch is called “The West Wing,” and it is on Sunday nights at 8 p.m. If you need to get caught up, this show in reruns is half the programming on Bravo network.