I had seen crucifix scenarios before. But none like this.

I think I was 8, maybe? 7? And I was staying with the grandparents in Kansas for the summer. And we were traveling from somewhere, and it was on a Sunday. And of course they just had to find a service. Where’d we stop, Eudora? Maybe? I don’t know. Some huge church in the middle of a corn field.

Now this church hadn’t just bought the normal Jesus on the cross statue thingie out of the regular Church Mart catalog. This thing was massive. Big, muscular Jesus. His hands bound to the cross and nailed solidly. His feet nailed with a single post. He was barely dressed, save of course for the bloody thorns on his head. And he was looking up at the sky with that forlorn sort of gaze.

The thing was massive and, rather than seeming to come from another era, it seemed real. Which I reckon was the point.

Bear in mind, I was reared secularly. I didn’t go to Bible study every week. I wasn’t in CYO. I got inklings via the occasional television preacher and when I stayed with friends overnight (there’s another story altogether there…they were Christian Science…) So my context for this was somewhat limited. I mean, your average Catholic is probably inclined to see at as simply part of the scenery.

I was a bit horrified.

And, it occurs to me to ask this Easter weekend: Who’s wrong? Childhood me? Or your average Catholic? 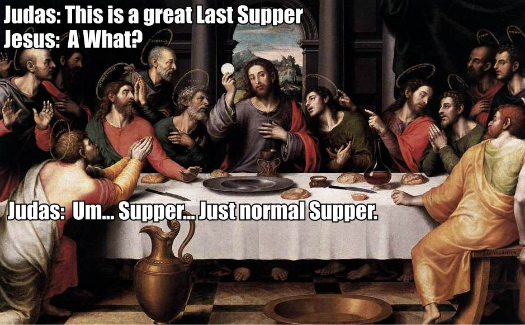 Ya’ll are celebrating a death cult tale with a zombie ending, one that is highly unlikely to have actually occurred, yet it is celebrated, and it is a cornerstone of our culture and the basis upon which many people make their moral choices.

It was only a few years ago that I gave myself permission to stop believing in supernatural forces. I’ve always been a skeptic, though not without some time wasted seeking in various capacities. But while many of these stories I have always found fanciful and irrelevant, I never said the words out loud much: I don’t believe.

I know many will take great comfort in their death cult rituals this weekend, and I do not begrudge them it. I think I may observe by replaying the recent Cosmos reboot on my magical box that relays images to me by some unexplained magic. Or maybe I’ll stick my nose into my Ingersoll biography on my magic tablet that magically puts word in front of me to read.

Great thanks to my wise parents for saving me the indoctrination. Happy Easter, and I think you Jewish folks have something or other going on as well, so mazel tov.

Next time: Why I try steadfastly as I can to avoid taking “the Lord’s” name in vain.