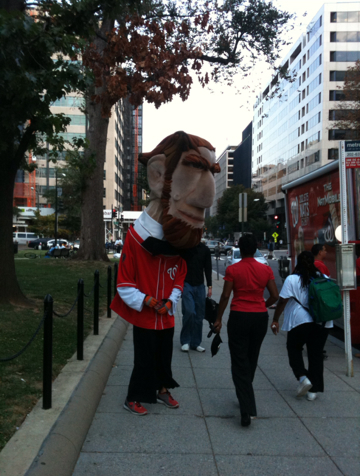 This morning was glorious. Dropped off the car at Mister Tire for the oil change. Jumped the 3A bus to Rosslyn. From there jumped the 38B to Farragut Square. This meant no time at all spent in the hot nasty underground. The nice thing about taking the bus is that you actually get to see Washington, and on my route, Georgetown. You don’t get to do much in the way of sightseeing underground. The other nice thing is that, for both buses, I had a seat.

Got to my office in good time and purchased a bowl of oatmeal, fresh fruit, and an ogret, and I don’t feel like I have that subway ooze on me. This may become the regular morning routine. It is much nicer than the subway, that is for sure.

If you are running
underground, I am laughing,
am laughing at you.

Rush for the honor
Of a crammed stinky hot ride
On a Metro train.

Yes, today was indeed a Singing Jesus Asian Man day. I do believe congratulations are in order. It was made even more spectacular by his rendition of “Amazing Grace.”

THE THIRD WORST thing that could happen by your forcing the Metro train doors open is that you might find yourself a Darwin Awards nominee, killing or injuring yourself via your own brutish stupidity.

The second worst thing that could happen is that you could achieve such a status not only for yourself but for the pack of idiots you are trying to help rush the Metro train doors. They are foolishly trusting your physical mettle as much as you do, and if you fail you’re not just responsible for hurting yourself; you are responsible for hurting them, too.

However, the worst thing that could happen is that you could make me and several hundred, perhaps several thousand, late to work. Foolish feats of strength such as the one I witnessed this morning are often why Metro trains end up stuck.

Am I overly annoyable through my daily commute, at the tourists who consistently block my passage off of the train, at the escalator leftstanders and the hogs of egress, at the pedestrian meanderers, and, perhaps most troubling, at the leaflet and newspaper distributors?

They are mother birds on PCP, more than eager to jam their found pablum into you. Here’s a restaurant you should try. Here’s some stuff on newsprint you should read. Here, you throw this away (thanks, Mitch). Today there was some falun gong dude handing out pamphlets inside the Metro Center station. Well, it was either falun gong he was selling, or it was miso.

I don’t know because I have a general policy of neither accepting nor offering anything whilst I’m in transit. I’ll pick up an Express from time to time, but that’s it. I’m not giving you money or whatever the hell you just mumbled to me about, and I’m not taking your little pieces of paper.

I’m thinking of printing up a little sign and wearing it on my hat. The sign would say, “I Accept No Fliers. Thank You.” And, if these people keep being pushy about it, on the other side of the sign, it would perhaps say “Piss Off, Already. I Said No.”

A few brief notes for subway riders in the Washington, D.C. metro area: